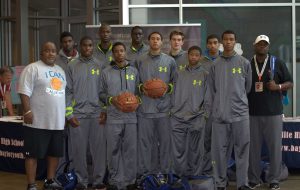 Jim Brown, former NFL legend and movie mogul established the Amer-I-Can Program which serves to empower individuals to change their lives and achieve to their fullest potential. The Amer-I-Can program motto is “Building a Better America … One person at a time”. The Amer-I-Can is comprised of eight principal components for success in life. I read thousands of success stories that derived from the Amer-I-Can program, but was fortunate enough to meet one of Jim’s prodigies, Rudolph “Rock” Johnson. Rock started his own program called the “I CAN Foundation”. Rock also has a sports component called I-Can All Star. Rock gives credit for his life transformation to Jim Brown and Jim’s mentoring program, Amer-I-Can.

Rock brought his very talented and athletic team from California to get some Midwest college exposure at our D1 Elite High School NCAA Certified Event in July 2012. Rock has placed over 200 student athletes into colleges across the US. He also has several NBA players that derived from his program such as Jordan Hamilton who plays for the Denver Nuggets, Derrick Williams who plays for Minnesota Timberwolves and Paul George who plays for the Indiana Pacers. Rock stated that “none of these kids were ranked going to college” and Rock thrives on the development of players and helping them succeed in life. I Can All Stars won the 2013 Gold Division at the D1 Elite Event NCAA Certified event in July.

Some of I Can All-Star featured players were Issaac Allen, 6’11, PF, Maurice Kirby 6’9, PF and Jamin Lackey, 6’7, Guard/Forward. To read more about these individual players, please subscribing to our scouting service.