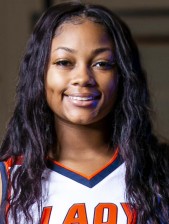 Myjae Armstrong is one of our 2019 alumni that has made a tremendous impact on social justice. She was one of the organizers and protestors for the march for the Black Lives Matter Movement in Northwest Indiana. Her group was featured on the local and national news media due to a gang of white people who tried to imitated the protesters with guns. News broke first on TMZ. They all showed bravery and courage. They completed the march through adversity and achieved their goal to get their message out to the masses. #blacklivesmatters

Myjae played in our program through 2013-2019. She has always showed empathy for anyone she encountered with any issues. She always wants to serve and assist. While in high school she would always assist Baylor Youth with our homeless efforts to support Grace Beyond Borders and working the streets of Chicago. She also volunteered at several senior citizens centers. Myjae earned an athletic scholarship to Langston University. It is only right that she would be continuing serving by pursing a career in the nursing field. Myjae received the Sooner Athletic Conference recognization out of 196 men and women student athlete for the 2019-20 conference ( All Academic SAC). She is not only juggling basketball, books but social justice.

Myjae is a true example of what Baylor Youth Foundation represents and has worked many years to build. BYF continues to make a difference in our young players lives on and off the court. She continues our tradition through activist and serving our communities.

Share on FacebookShare on TwitterShare on Linkedin
Posted in Recruiting News, Foundation News
×
0