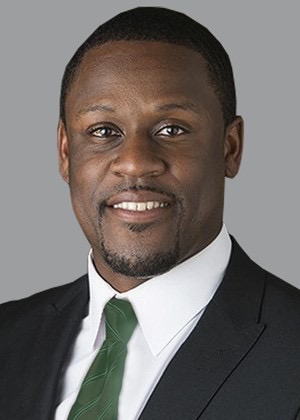 An In-Depth Look at Women’s Basketball Today: Choosing the Right College or University.

These workshops will feature some of the top College Coaches from across the country, including Div I & II, NAIA and NJCAA

Katrina Merriweather was named as the seventh head coach in Wright State women's basketball coach on April 19, 2016 and she hasn't stopped running.

The 2016-17 was historic for the WSU women's basketball program as she led the Raiders to 25 wins and a berth in the WNIT, hosting the first round game before taking Michigan to the brink in the round two.  Another first came as the Raiders received votes in the national Top 25 for the first-time ever.  Named the Horizon League Coach of the Year, Merriweather set the bar higher than ever, and expects to achieve new heights.

Her second season at the helm was much of the same success as the team advanced to the WNIT again.  The Raiders finished the season at 23-11, 12-6 as Chelsea Welch was named the Player of the Year and to the league's first team.  Emily Vogelpohl also was honored as she was placed on the All-Defensive Team.  Welch later signed a professional contract to play in Portugal.

The 2018-19 season saw Merriweather take the program to new heights with a record of 27-7, 16-2 and the school's first-ever regular-season title.  WSU cruised through the Horizon League Tournament and advanced to just its second NCAA Tournament, playing at Texas A&M.  Four Wright State women's basketball players and head coach Katrina Merriweather were honored by the Horizon League.  Merriweather was named the Coach of the Year as Mackenzie Taylor was selected to the first team, Symone Simmons to the second team, Angel Baker to the Freshman Team and Emily Vogelpohl to the All-Defensive Team.

A former assistant at Purdue, UIC and Cincinnati, Merriweather joined the Wright State women's basketball coaching staff as an assistant in September, 2010.

Teaming with then-head coach Mike Bradbury, the Raiders reached new heights in 2010-11 as WSU played in its first Division I post-season tournament with two games in the Women's Basketball Invitational and secured the program's first 20-win in Division I.

An assistant with the Boilermakers from 2003-06, Merriweather served as the program's recruiting coordinator and assisted with scouting along with coaching the guards.

In 2003-04, her first year at Purdue, Merriweather assisted the Boilermakers in a 29-4 campaign, a season that saw Purdue win the Big Ten Tournament and advanced to the NCAA Sweet 16. She also played a major role in recruiting a five-player class rated in many scouting services' top 10.

Merriweather's recruiting success carried over the following year, as she helped sign a class rated in the top 10 by Blue Star Basketball. While she was scouring gyms nationwide, Merriweather also filled her role in Mackey Arena, helping guide one of the youngest teams in Purdue history to a 17-win season and an NCAA Tournament berth.

During the 2005-06 season, Purdue finished 26-7 and again advanced to the NCAA Sweet 16 before falling to top-ranked North Carolina. The Boilermakers were second in the Big Ten standings and were runner-up in the conference tournament. The recruiting class was ranked third nationally by Blue Star Basketball.

Before coming to Purdue, Merriweather served as an assistant coach for a year at UIC. Charged with performing duties such as travel, film exchange, scouting and recruiting correspondence, Merriweather was part of head coach Lisa Ryckbosch's staff that guided the Flames to a 17-11 record in 2002-03.

Merriweather began her collegiate coaching career at Cincinnati, her alma mater. As a graduate assistant during the 2001-02 season, Merriweather handled scouting and film duties. The Bearcats posted a 26-5 record that year and advanced to the second round of the NCAA Tournament.

A native of Indianapolis, Merriweather graduated from Cincinnati in 2001 with a degree in English literature and earned a second degree in secondary education in 2002. Under head coach Laurie Pirtle, the Bearcats advanced to postseason play all four years during Merriweather's career, competing in the NCAA Tournament in 1999 and the WNIT in 1998, 2000 and 2001. During her career, Cincinnati posted an 83-41 record.

Along with her college coaching career, Merriweather has also coached AAU basketball for The Family, Inc., based in Indianapolis, and has served as a summer camp coach at several universities.

A 1997 graduate from Cathedral High School in Indianapolis, Merriweather was a member of the 1997 Indiana All-Star Team.